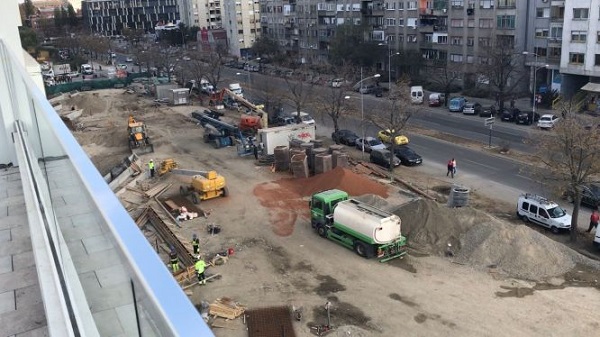 Not even ten days after the mayor of Novi Sad Milos Vucevic announced a “for-cause” inspection of the construction works on the Promenada Shopping Centre because of alleged mistakes made by the investor, have the competent bodies issued any official information to the public.

His announcement followed the warning issued by the League of Social Democrats of Vojvodina and “Gradjanska Vojvodina” coalition of NGOs that the negligence in the execution of the construction of Promenada engendered the safety of the citizens.

Regardless of the fact that the warnings have upset a significant part of the general public, the city’s department of inspection has still not released the inspection results, although its extraordinary reaction was announced almost two weeks ago, when mayor Vucevic promised to examine all the facts.

In his statement for the Dnevnik daily newspaper from Novi Sad, he denied that the citizens of Novi Sad were endangered and emphasized that the city would never allow that to happen and that the situation was monitored on a daily basis. The warnings related to Promenada were described by Vucevic as stories “made up by various political groups,” but he announced an inspection of the project nevertheless.

“No-one can act outside the law and everything will be done in accordance with regulations and consultations with experts,” Vucevic told Dnevnik.

However, whether everything had really been done in accordance with regulations remains a mystery to the general public. Apart from Vucevic, only the investor company NEPI Rockcastle has reacted with a delay of several days issuing a generic announcement stating, among other things, that “all works on the construction of the Promenada Shopping Centre were conducted in accordance with the permits issued by the competent bodies, in accordance with the law and special regulations.”

The investor company failed to answer a question asked by VOICE whether they noticed a problem with underground water during the implementation of the project, which could allegedly have catastrophic consequences and if they did, what steps have they taken to remedy the problem.

Nor have we received any response from the “Vodovod I kanalizacija” PUC. The director of this company Gvozden Perkovic refused to comment on the mentioned allegations. We have received a message from this office that communication had to take place through the public relations department of the company, but that communication channel has remained closed as well.

VOICE tried to obtain information from the city’s department of inspection regarding the date when the citizens could expect the results of the “for-cause” inspection of Promenada, whether the facility has been inspected at all and whether this body has noticed any irregularities related to underground water.

The reply from the department was that we should contact the PR department of the city of Novi Sad, because that was the procedure. We did as instructed and forwarded the questions a week ago. However, we still haven’t heard from them.