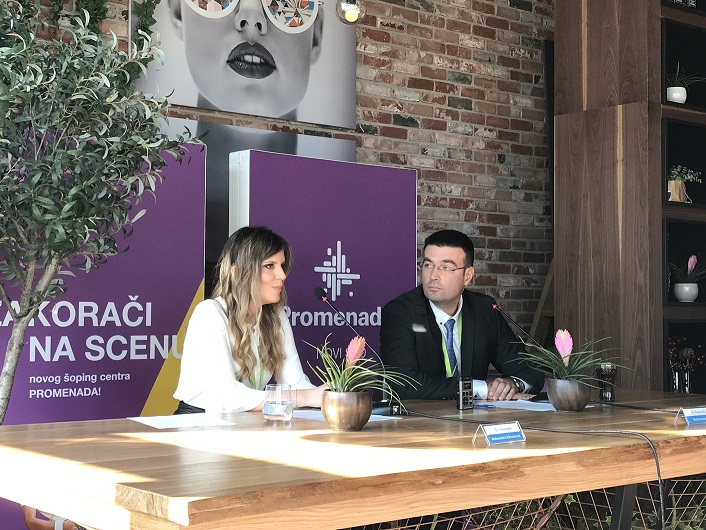 Representatives of NEPI Rockcastle issued an official statement one day after an incident with the fire alarm at the Promenada Shopping Centre in which they said that an “unnamed person” was responsible for the incident, because they “vandalised” one of the fire alarm panels. VOICE asked the management of Promenada additional questions, since some details remained unclear, but we have not received clear answers.

In a press release, signed by NEPI’s marketing manager Tina Mijovic, it is stated that the fire alarm was activated by an “unnamed person with malicious forethought” and that the fire-fighting department established it had been a false alarm immediately after the alarm went off.

The manager states that since it was immediately established there was no threat of fire, there was no need to evacuate the visitors to the cinema. The statement signed by her also mentions that the alarm went off everywhere around the shopping centre, which contradicts statements of witnesses who were present at the Cineplexx Promenada cinema at the time, who claim no-one informed them about evacuation during movie screening.

Tina Mijovic has not answered a single of many calls from VOICE, so the questions related to this incident were submitted to Darija Kustudija, marketing manager of Promenada.

VOICE tried to find out when the fire alarm panels were inspected and when it was established that one of them had been “vandalised”, since soon after the incidents there were reports in the media that such a scenario was rejected and that all devices were undamaged.

“The press release clearly states all the fact. Certain information that some media published right after the incident is false,” claims Kustudija.

We also sought an explanation of exactly how much time had passed from the moment the alarm went off to the moment when it was discovered it was a false alarm, and why the visitors to the cinema were not evacuated, at least as a measure of precaution, which is common in such situations, when people are evacuated before experts establish whether it is a false alarm or a genuine threat.

“When it comes to evacuation, it started as soon as the alarm went off and stopped a few minutes later, when the team of firefighters established it was a false alarm. The process of evacuation includes everyone at Promenada,” said Darija Kustudija in her brief reply.

However, she did not answer the questions whether the visitors to the Cineplexx cinema had not been informed about the evacuation before the screening was over because of a failure in the fire alarm system or because a competent person decided not to activate the fire alarm in that part of the shopping centre.

NEPI has on several occasions submitted requests for acceptance of technical documentation relevant to fire protection, but in most cases these requests have been either rejected or denied by the Serbian Ministry of Interior Affairs.

The first request was rejected last year in June because original documents and translations of foreign standards used in the design were submitted, which made it impossible to establish whether all the requirements from these standards were met, along with the requirements defined in the Law on Fire Protection.

The biggest shopping centre in Serbia, Promenada, was declared open on 15th November in accordance with the set deadline, but without a use permit. Instead, the investor company NEPI Rockcastle was issued a permit for trial operation by an independent committee hired by the investor company.