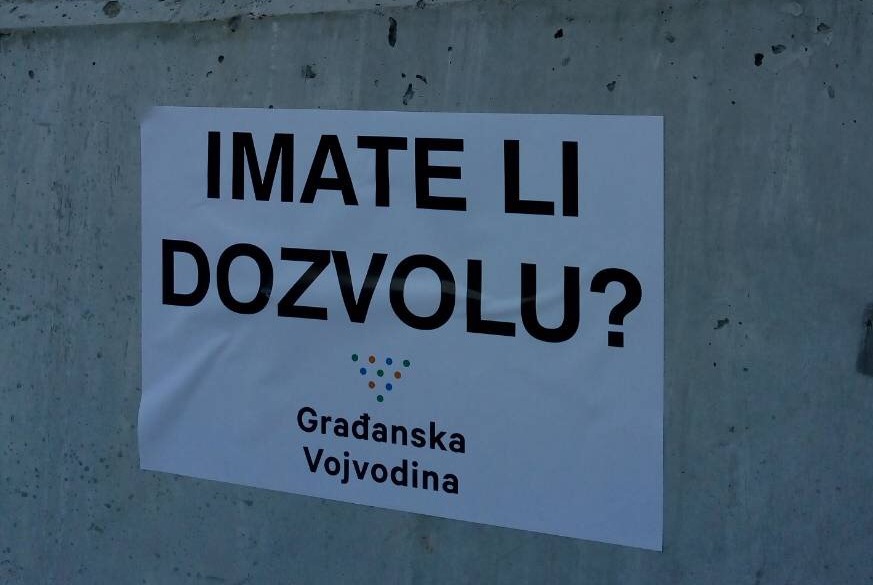 At the end of September, the contractors working on the construction of the Promenada Shopping Centre were left without a permit to pump excess underground water from the construction site, when “Vodovod i kanalizacija” PUC refused to extend the permit. However, it is the middle of October and all the machines and workers are working at full steam, obviously in order to finish the works before the set deadline.

As a rule, when a permit is missing, construction works are suspended until the permit is obtained. However, in practice, that rule does not apply to everyone, as exemplified by the case of PAB Company, which continued the construction works despite the fact the necessary documentation was incomplete.

The department in charge of integrated procedures of the city’s managing board confirmed that no construction works can take place without all permits, but they failed to answer how it was possible for the biggest construction site in Novi Sad to be active.

“The building inspection has to monitor that, it is their job and if something is done outside the scope of the issued permits, they have to suspend the construction,” said the people working in the department and added that no permit can be issued subsequently, during construction works.

The chief engineer at “Vodovod i kanalizacija” PUC Ikonija Karadzic said she did not know how it was possible to continue the works on Promenada without the permit in question. She explained that a permit could be extended only if rehabilitation works were needed.

“If they introduced a contractor to perform rehabilitation works on the foundation or something like that, we could extend the permit for another month to this new contractor, until they finished rehabilitation works,” she explains and adds that “Vodovod I kanalizaija” has not received such a request so far.

Tina Mijovic, PR officer of the investor company NEPI Rockcastle, also did not know how to explain why the construction works had not been suspended, since the contractor did not have all the necessary permits.

“As I have already told you, we have given you all the statements we have issued. Right now I can’t give you any answer, it is like that. We will definitely send you an official statement when we make it,” she said in a phone conversation.

Namely, “Vodovod i kanalizacija” PUC rejected a request from PAB Company to extend the permit for pumping excess underground water during the construction works on the construction site of the Promenada Shopping Centre.

The permit in question expired on 1st October 2018. That is why a request for extension was submitted, but “Vodovod i kanalizacija” rejected it.

As “Vodovod i kanalizacija” stated in their memo, an on-site inspection established that the facility was in the final stage and about to be put into operation, which meant “there are no more opportunities for releasing excess underground water into the city’s sewage system on the construction site.”

It is worth noting that when it comes to releasing excess underground water, such permit is issued to contractors only during construction works, more specifically until the foundations are protected and hydro-insulation installed. It can be renewed for a period of two to three months, but in case of Promenada it was renewed for over a year.

Building inspection did not conduct “for-cause” inspection after all?

Just over a month ago, the mayor of Novi Sad Milos Vucevic promised a “for-cause” inspection of the Promenada construction site, following the appeals sent by the League of Social Democrats of Vojvodina, NGOs and opposition parties, in which they claimed that due to poor execution of works and complications with underground water we were facing a potential catastrophe, i.e. destruction of the sewage system, partial damage to the drinking water springs and long-term detrimental effects on the foundations of the nearby residential buildings.

Not long after that, Vucevic talked to the provincial public broadcasting network and said that the building inspection had conducted a “for-cause” inspection and that the works on the Promenada construction site were progressing in accordance with the permits. However, according to the information obtained by VOICE, this inspection and supervision are still in progress.

According to Ikonija Karadzic, chief engineer at “Vodovod i kanalizacija”, this company is preparing a reply to the memo sent by the city’s department in charge of inspection, related to Promenada.

“We will send the documents that clearly show that we told the contractors, before the building permit was changed, that they were not allowed to release excess water into our system,” she said and added that the inspection should then take the necessary steps that are under their jurisdiction.

A representative of the coalition of NGOs “Gradjanska Vojvodina” Aleksandar Popov provided his assessment that in the case of Promenada it was not about professionalism and expertise, but that it was merely “an agreement between institutions and someone from the authorities who issued such a permit in the first place”, which he dubbed a sequel to “Belgrade Waterfront.”

“We can see the consequences of arrogant behaviour of the authorities. When they get entangled into a problem, which is a result of not following the procedures, no one wishes to suffer the consequences, which is why they try to get away with it,” says Popov and emphasises that it is obviously the case of some kind of a “deal” between someone from the city management and the investor.

“Now, parts of the city’s communal utilities system are in conflict, but they can’t have a public argument, because that would reveal where the mistake was made,” he believes.

Popov also says that we can expect the whole thing to be covered up and that it is already happening in order to cover the original mistakes.

“Why can’t we hear anything from these companies? The idea is to resolve the situation without making noise. They’ll wait for the dust to settle and then they’ll do something, but they definitely won’t demolish Promenada just because it doesn’t have some permits,“ Aleksandar Popov concludes.